A lovely Spring day in the Netherlands, and I thought I’d write a short blogpost to show you my latest art journal page and then go outside and walk in the sun… but it turns out otherwise.

One hour later, and I’m still at the computer. That’s what you get when you use one of your favorite (lyric) texts on your page and want to tell something about it… the last hour I surfed the Internet looking for a video of the singer and this song, and I fell in love all over again with this passionate artist. I even found a blog about the singer and the songs translated to English (as he was from Belgium and sang mostly in French – and sometimes in Dutch.)

By now, most Dutch readers should know who I am talking about… 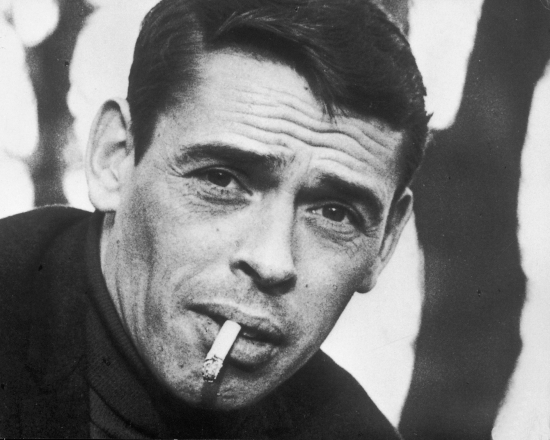 American/English followers may not know this artist, but you all sure know one of his songs when I tell you this: “Seasons in the Sun” is an English-language adaptation of the song “Le Moribond” by Belgian singer-songwriter Jacques Brel with lyrics by American singer-poet Rod McKuen. It became a worldwide hit in 1974 for Canadian singer Terry Jacks.” ~ Wikipedia

There’s a lot more to tell and I’ll come to that, but first let’s talk about the art journal page I made for The Documented Life Project

“Custom elements are all of those aspects of an art piece that make it your own.” I reflected on this thought: which are elements (materials, techniques, images) that I use often? The ones that I feel comfortable with and that make an art piece really ‘MINE?’

Mono-printing! That is a technique I use a lot and, while working with a gelli-plate, I keep on grabbing circles. Also, there is that favorite silhouette of a figure that shows up on my pages a lot. I like to add texture by machine-stitching too. So I build up my art journal page using these elements. Now I had this page, and I thought about the last element that had to go on it. Text. I hardly ever make an art journal page without text. Preferably my own words but I use song lyrics a lot too. So, what should I choose?

Well, there’s this one line from the song “Les Bourgeois”  (by Jacques Brel, you guessed it 😉 ) that is just perfect to express that I use either song lyrics or my own words in my art journals. Roughly translated it says: “And I, I who am the most proud. Me, well I talk about me…” 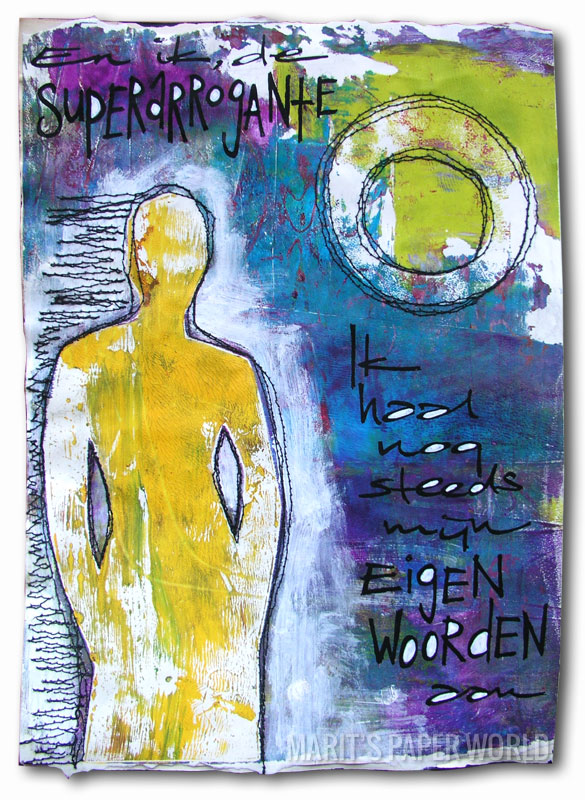 The song “Les Bourgeois” (“The Middle Classes”) is worth listening to and there’s a lot to tell about that song, as Brel tells a story that did not fall right within the ‘bourgeois’ circles of that time. While searching for (English) words to explain, I came across a blog that does it for me: The Brel Translation Project

Here’s some explanation about the song:

“…The song tells a story of young men spending evenings drinking in a pub before drunkenly mooning at and verbally abusing some lawyers they see leaving the bar of a hotel opposite. The young men grow and graduate to drinking among lawyers at that hotel bar, and the song ends with them reporting to the police the same verbal abuse hurled at them. The singalong chorus is the taunt sent and later received by the protagonists, and its catchy nature ensures the complicity of Brel’s audience in that mischief. What’s more, the chorus playfully ends with a blank, an empty space which we are invited to complete with the most vulgar of words in the French language.

Here’s a link to the full blogpost with more info and the complete translation of the song.

So now you are curious to hear the song?
See the singer perform?
Of course you are!
Here’s the video (with English sub titles)