You know I am all into art journaling… and if you are too, I’m sure you have been to Tammy Garcia’s weblog Daisy Yellow before. Tammy invited me to write a guest post for her DPP (daily paper prompt) series and because I am not only into art journaling, but also into music ánd a fan of Tammy – I came up with a wonderful prompt! Well, at least I find it a wonderful prompt!

Hop on over to the Daily Paper Prompt Posts at Daisy Yellow to see my guest prompt and join the daily fun – Oh, and when you visit Daily Yellow, I advise you look a bit further than just the prompt I came up with and take a look at all the colourful gorgeousness and major inspiration Daily Yellow brings!

The Daily Paper Prompt I came up with is about getting inspired by the rhythm of music. I took photos during my creating process that make a little tutorial. Are you in for that? Come on in then…

First, I taped a big piece of blank paper onto cardboard and placed it on my easel. 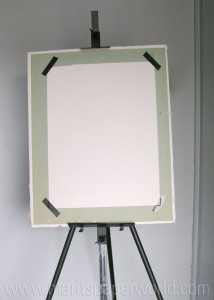 I then put some paint on my palet. At this point, I did not know what music would be my inspiration, so I choose random colours that spoke to me at that moment. 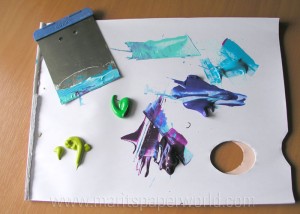 I decided to work with a palet-knife but you can choose whatever material or tool you like:
brush and paint, pencils, crayons, pens and so on…

Now that my materials were in place, I was ready to go so I turned on the radio.
I had no idea what music would be on. The radio played a song I never heard before
and I just went with it. I started to smear paint on the paper to the rhythm of the song.

This is the image I ended up with… created to the tune with paint and a palet knife. 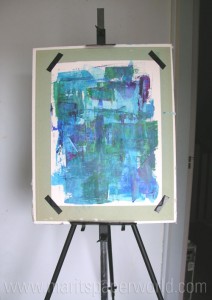 The fun thing about this way of creating is, that the song does not need to have lyrics.
You can even put on a cd with classical music – or hiphop, or house music… anything goes.

After I’d created this background, I got curious to what the song had been all about… so I looked on the internet and found the playlist of the radio station. The song was Waves by Mr. Probz, a Dutch rapper/artist I did not know. I had not thought he was a rapper, as the song does not sound like ‘rap’ to me – I kinda like it even!

I also found the lyrics of the song here and was surprised when I read those… I had used just the right ‘watery’ colours! Then, I saw an image of a lighthouse and a boat (sail) popping out to me from the background, so I scribbled with a crayon and did some machine stitching to bring those shapes out. 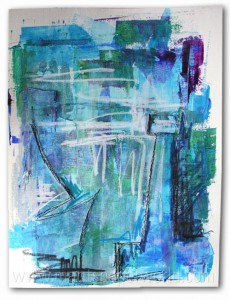 The lighthouse deserved more attention, so I cut out the shape from old dictionary pages, sprayed a bit of ink on it and glued it onto the page. I added a moon (0r is it a sun?) and I journaled part of the lyrics on top of it. 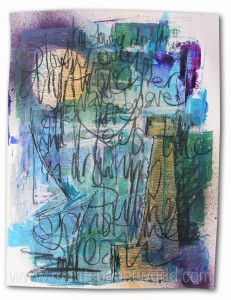 Now it is your turn. Go grab your materials and turn on the radio…

…but before you do, one last request

If you follow me, then you know I am the founder of FEATURING magazine.

FEATURING released four issues but we notice that still a lot of people haven’t heard of this magazine… and in order to keep this awesome art publication alive and going, we have to spread the word and get more brand awareness so we can reach more customers. The release of the next issue depends on that.

Thunderclap is an app that updates the Facebook status, Tumblr or Twitter feed from every person who clicks the link on the FEATURING thunderclap page. Thunderclap allows a single message to be mass-shared, flash mob-style. It only happens once and won’t spam your friends, but the end result is that if we reach the goal of 500 supporters, massive amounts of people are reached and the name of FEATURING magazine will be heard. We have only two weeks left to reach our goal of 500 people that click the link and support FEATURING…

Are you a friend and fan of me and FEATURING? Then please visit the FEATURING Thunderclap page and donate a tweet or Facebook status update to help us promote the magazine.