Hello, hello there my friends!

This is Freewheelin’ Friday ‘I lost count of the number”
and there’s certainly not much freewheelin’ for me today!
I worked all day, and am facing another busy weekend.
Aaaaarghhh… I do miss my journals, my paint and I especially
miss FREE TIME. I miss the days on which I got up early, knowing
that I had all the time of the world to spend with my art journals.
I must abide by a minute here and there to add something to my
art journal pages – but that’s the philosophy behind ‘art journal every day’
isn’t it? That is exactly what I’m doing these days – work hard during the day,
and play with my art journal pages for a few minutes in between diner and
fave tv-shows/bed.

In those ‘lost minutes’ I did manage to get something done though,
so I’m glad to announce that I can show you 2 (yes, TWO) list pages today. 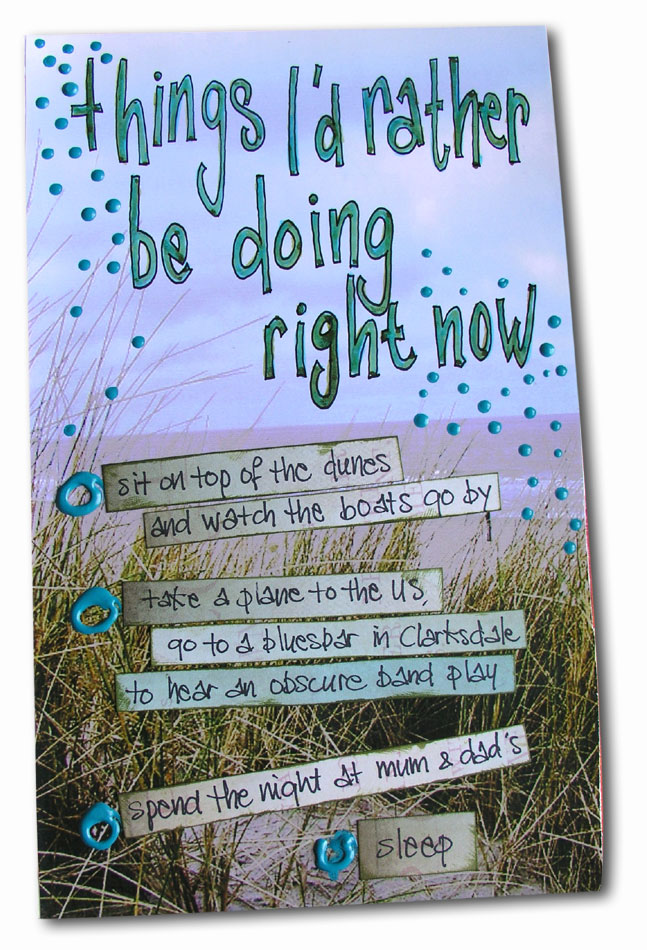 I jotted this list down one evening at the beginning of the week, just after
I saw a music documentary on tv. (Now that I think of it – I can’t even
remember what it was about, or which day it was! I’m getting old… eeeckkkk…
or maybe stress takes its toll?)

Anyway, that’s where the ‘take a plane’ part comes from.
As you know, I don’t like to travel but that night, I suddenly felt an itch and
thought that it would be so much fun to fly to the US with my beloved, sit in
a bar (is it allowed to smoke in bars in the US? That’s something I need to
know!) and hear a band play! It may never come this far, but I find consolation
in the fact that we possess tickets to the Eels concert in June! There will be
no traveling involved – it’s nearby and we can get there by bike!
I will be there with my beloved and son, and I’m soooo looking forward to it!
It has been ages since I went to a concert! (over 10 years now – or more?! 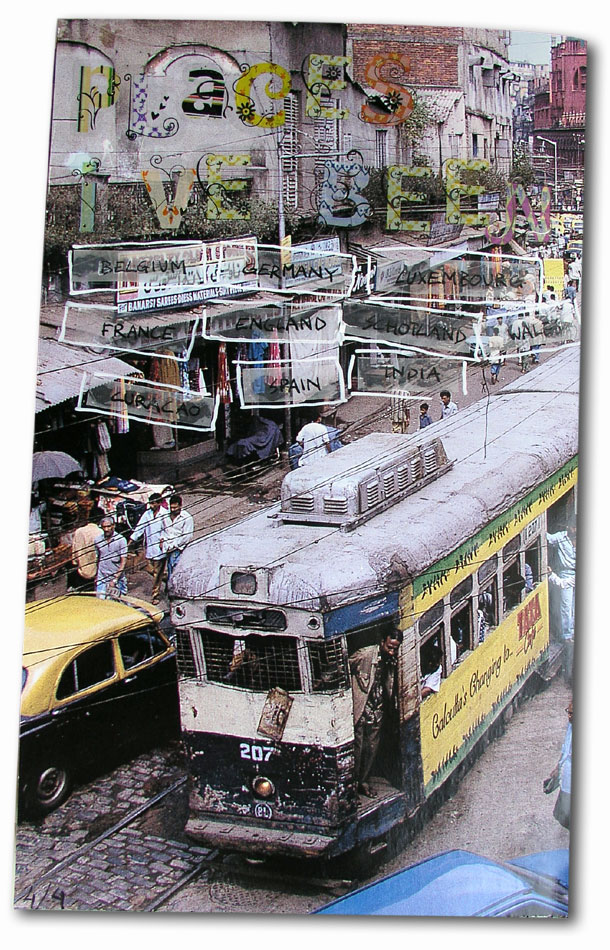 The prompt for list #28 said ‘Vacations to take’ but – as I stated above –
I don’t like going on vacation and I certainly don’t plan vacations or
– god forbid – make lists about it! So I turned the prompt around,
and listed the places I have been on vacation ‘back in the days’.
It’s hard to read, because I didn’t want to spoil the fabulous photo
(from a street in Calcutta. The photo comes from an old National
Geographic magazine). I used transparent stickers for the title, they
totally blend into the background, and I wrote the places on tracing
paper – which is also a bit transparent.
Here’s where I’ve been on vacation:

And here ends my trip down memory lane.
It’s time for me to cook diner!
Enjoy your weekend sweet friends, see you next week!