Most of you who follow me for longer then a year recognize this logo…
and the story behind it. For those who don’t know, a brief history
(more posts will follow later!)

From Christmas to New Year,  the Radio 2 team presents the 2000
favorite songs of the listeners. Music! 24 hours a day!
A few years back, in the slipstream of the top 2000, I started my
‘top 2000 blog party‘. I created art every day inspired by a song
from the list. Everyone was invited to play along and create to
the music – and I posted all the submissions on my blog.
What succes it was! Even the top 2000 people picked up my ‘party’
and came to film me, the video can still be seen here on youtube.

This will be the fourth year that we will have this artful and musical
blog party, and I know for sure that a lot of participants look forward
to it as much as I do!

More information and ‘rules’ will be posted on my blog once the
‘official list’ is out… but that list should be composed still… and that is
where today’s blogpost comes in!

Vote for your fave songs from November 16 – November 23

I made a ‘tutorial’ for all my English-speaking fellow-artists who want
to play along… the fun starts right here as you can now vote for your
favourite songs to get in the list! The highest ranked 2000 songs will
be played on the radio/Internet in the last week of 2012.

Look at the images below to see how it works – then go to the
TOP 2000 VOTING WEBSITE and find your fave songs to vote on. 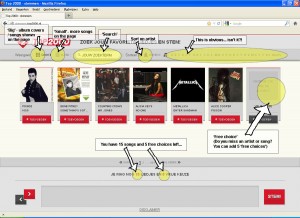 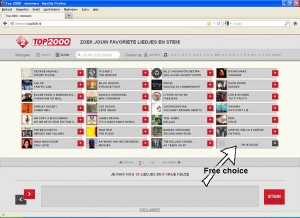 When you click on ‘free choice’, you see the following window 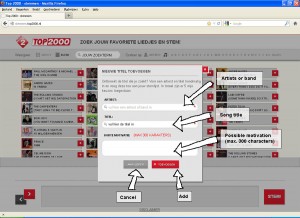 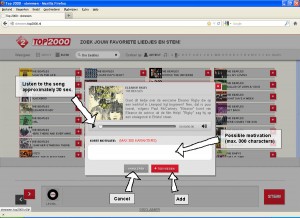 Your choices are visible in the space at the bottom of the screen. 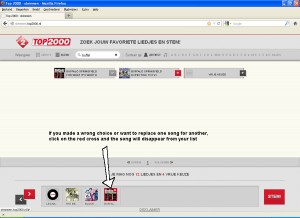 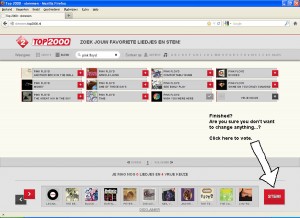 The top 2000 team knows there are people voting from abroad!
To get rid of ‘typical Dutch’ fields, fill in your country first. 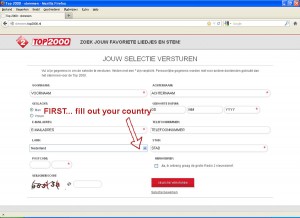 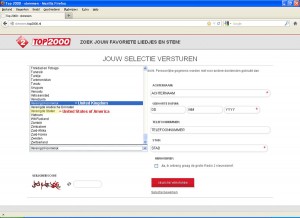 Now fill in the form (see translation on the image below) 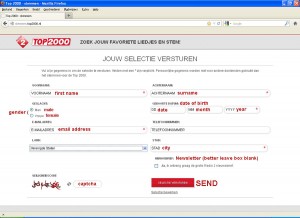 The next page, after you clicked ‘send’, is a survey.
You better skip it… 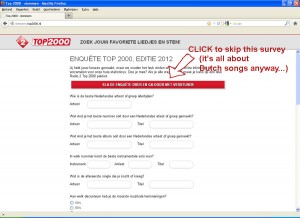 Last page (pfew!) but it holds an important message.
To confirm your vote you will have to click the link
in the email that is sent to you! 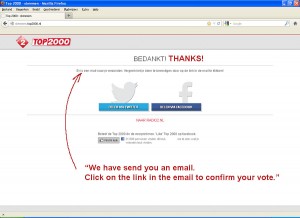 Go to your inbox, click the link in the email and your vote will be confirmed.
(“Thanks, your vote has been confirmed.”) There’s also a link on the site that
takes you to your personal list – the songs you voted for – when you click on it.

Voting is possible until November 23.

I’ll explain all about the top 2000 blog party as soon as the ‘official list’
is announced! In the meantime, feel free to grab my top 2000 blinkie
from the side menu if you’re planning to participate.