This is my first blogpost of 2013 and are you prepared for a long one?
Sit down, grab a cup of coffee and enjoy this ‘top 2000 flashback’

But first of all, this:

There were a lot (and when I say a lot, I mean A LOT) participants playing in my top 2000 blog party last week and MAN, did we all have fun!!! My art was in between all the submitted pieces on my blog every day and it just said the artist and name of the song with every piece. (If you want to see all the art pieces, click here to see view all the top 2000 posts.) But as I explained before – I picked ‘my  songs’ for a reason. The songs that inspired me to make an art journal page are all songs that have special meaning to me… the song itself may not even be a favorite of mine but each song evokes a certain memory. In this post, I publish each page again with the background story. Enjoy! 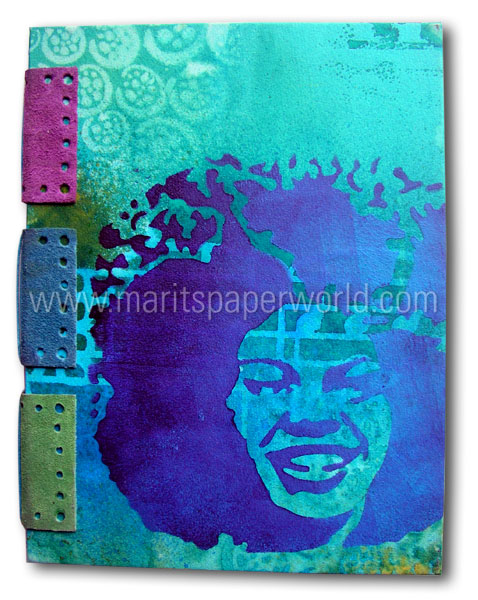 I bound a special ‘Top 2000 Art Journal’ to work in. There’s no particular reason why I used the face of this woman: I just love this Ed Roth template and I think she looks like a soul singer, don’t you?

I found three coloured pieces of suède (parts of an old ‘seventies belt’) that were perfect to use for the binding. 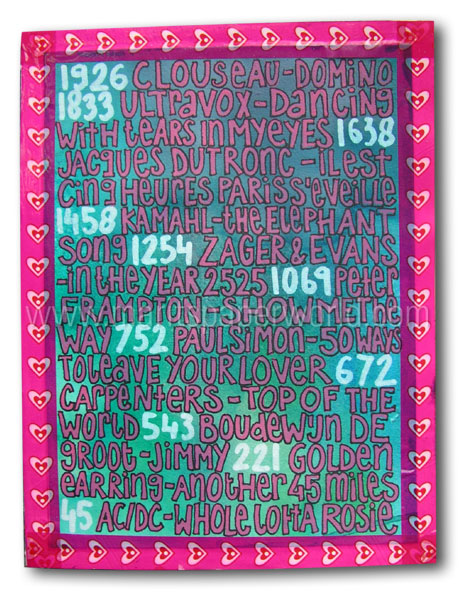 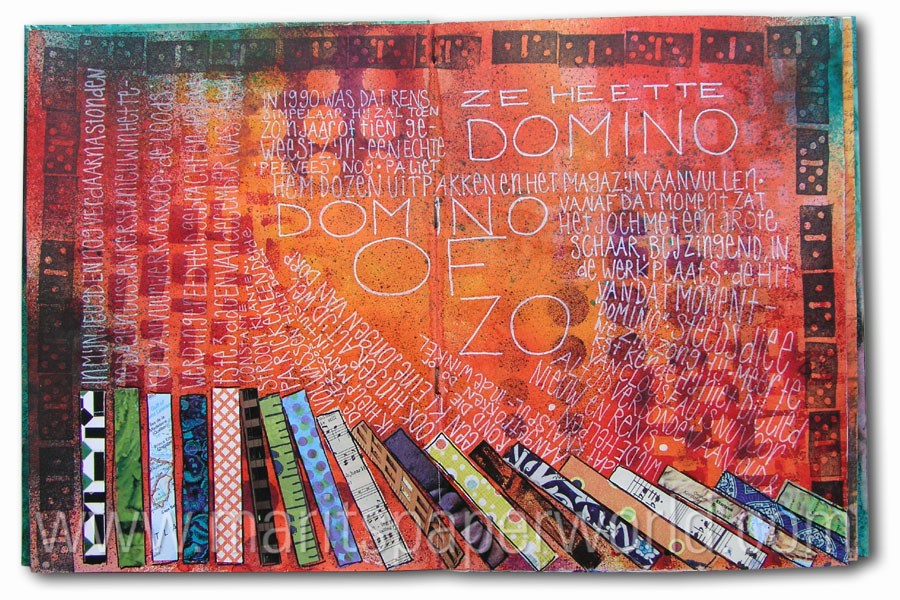 “Her name was Domino, Domino or so…”
In my youth, and even years later, the days between Christmas and New Year were all about my dad selling fireworks*. The shed got prepared and the last three days of December there was a constant stream of customers. Pa, my brother and a third adult helped with the sales. I helped my mom around the house, as it were busy times with a lot of visitors. Also, there was always some little boy from the village hanging around our property every year. After all, little boys are attracted by colourful ‘firing stuff.’  They always were much too young to help in the store. In 1990, there was a boy called Rens hanging around the house. My dad knew him and said he could help with unpacking and complement the warehouse boxes. From that moment on, the boy and his scissors were happily sitting in the cold workspace, unpacking the boxes of fireworks and singing. Rens sang all day. One song in particular: “Domino.” Rens knew only one sentence of the song and he sang it over and over again all day long… This song by Clouseau is now forever associated with the last days of December and Rens.

* In the Netherlands, people older then 16 are allowed to buy fireworks three days a year and fire it on New Years Eve at midnight to celebrate the New Year.

Day 2: Ultravox – Dancing With Tears In My Eyes 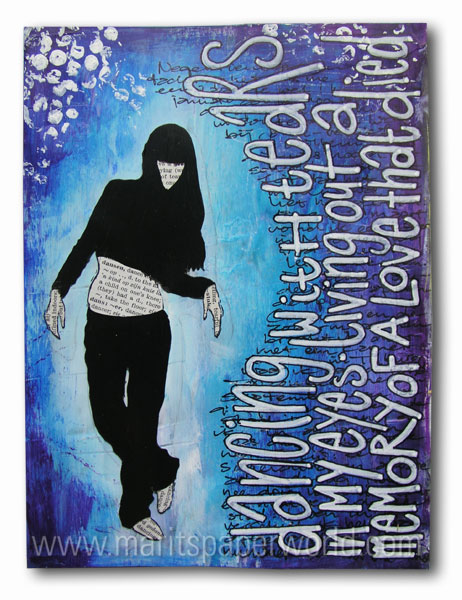 “Dancing with tears in my eyes, living out a memory of a love that died.” 1984 was an ‘extreme’ year for me. I split up with a man, moved out and lived in a small student-room. Another love affair was also coming to an end. I graduated from one study and after the Summer, moved to another city to start a new study… in short: heavy! That Summer I often went into town with friends. This song was played in the various discotheques and the lyrics always hit me. I danced a lot that Summer (and yes, often with tears in my eyes) 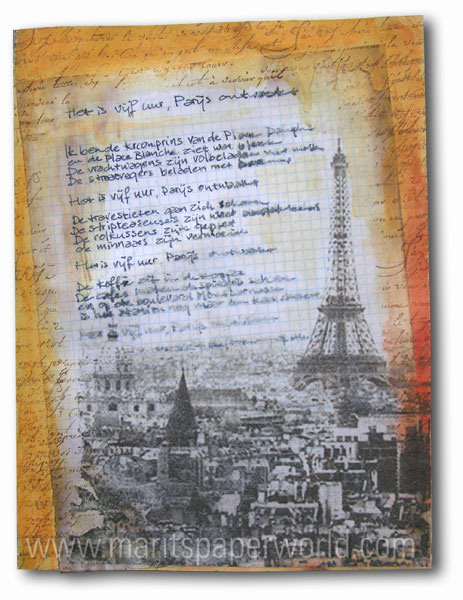 High school – and I was not that good with French. My pronunciation of the language was fine and reading texts out loud was no problem to me – but I didn’t understand one word of what I was saying… However, there is one French lesson I remember well. The teacher played this song and we, the students, had to translate it. Time after time again the song was played and the sentences were translated one by one. I still know this song inside and out – in French and Dutch! 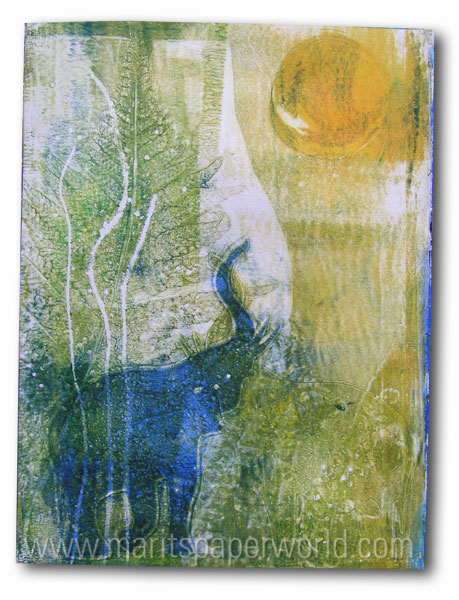 I was approximately eleven years old when this song was popular in The Netherlands … and I found it a very special song. It was the first time that I became aware of the fact that songs didn’t always were about love. This song was about elephants and it called out to the people to start protecting these animals and save them from extinction. My children’s heart was immediately sold… also by the man who could sing that low and had twinkling eyes. (By the way: my father teased me all the time with that.) 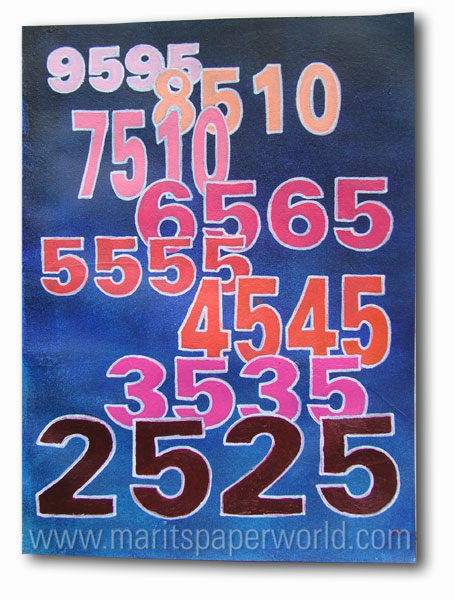 I heard this song for the first time – as a very young girl – on a jukebox in the local café … I asked my father what it was about and he explained that the singer takes the song further and further into the future and wonders about how the world will look then. I found that quite intriguing back then, and I still do. 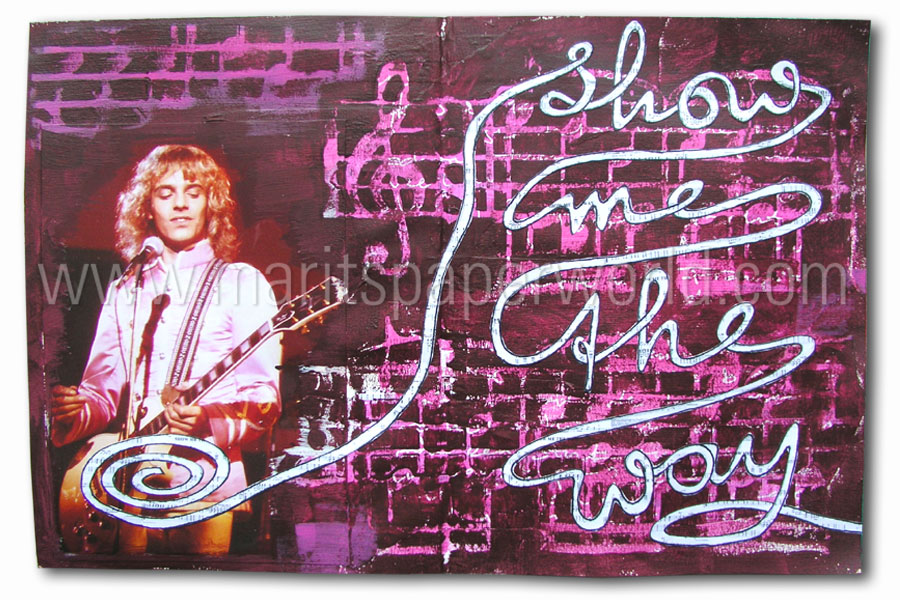 Hahaaa … “Peter Frampton live in concert.” I was twelve, an age when girls giggle with girlfriends. And giggle we did at the sight of Peter Frampton! During this song he has some sort of tube in his mouth to make those special guitar-effects… but that tube, together with Peter in his tight pants, gave us girls reason to speculate a lot. Much giggles and great fun! 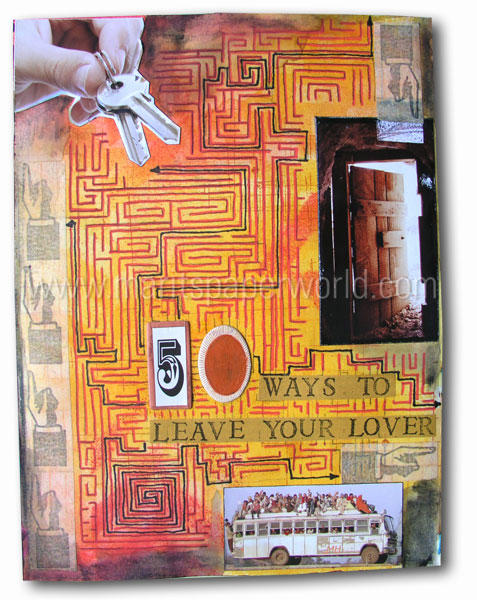 There were times when friends often came to me if they have problems in their relationship. I listened to the stories, the whining, moaning and groaning, and tried to think with them and give advice. Each relationship needs working on. But after all was said and done and they still were not content, I always ended up with this advice: “The answer is easy, if you take it logically – Just hop on the bus, Gus / Don’t need to discuss much / Just drop or the key, Lee / And get yourself free.”

Day 5: Carpenters – Top Of The World 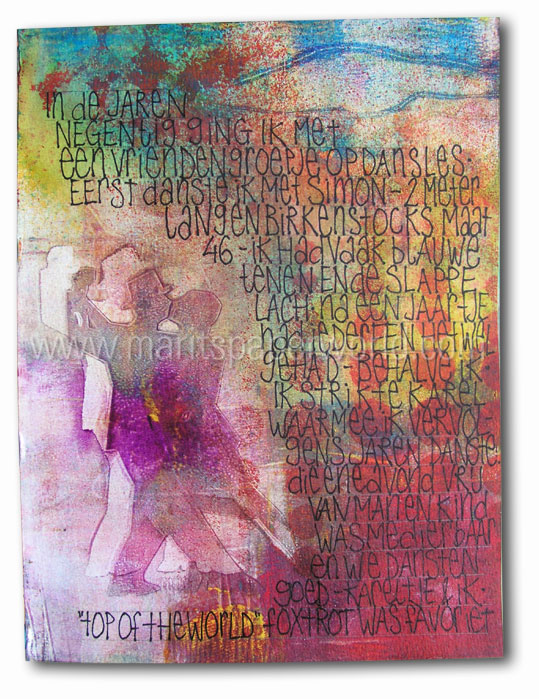 In the nineties I took dancing lessons with a group of friends. My first dance partner was S., a 6.5 feet tall guy with shoes size 12.  I often had the giggles and blue toes. After a year or so, everyone from the group had it had with the dancing; everyone except me. I found another dancing partner and for years I danced with K. I loved the one evening a week that I was ‘free’ from man and child and we danced very well together, K. and me. “Top of the World” was my favorite song to dance the foxtrot. 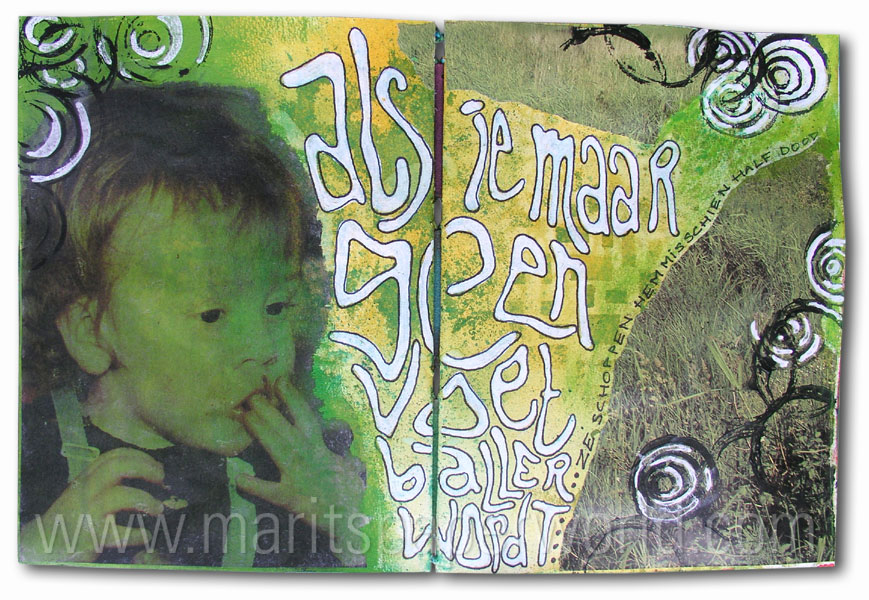 When my son was born my father gave me the book “Among the Thugs” by Bill Buford  as a gift … on the first page, he wrote this sentence from a famous Dutch song: “I hope he doesn’t become a soccer player… they might kick him half to death” 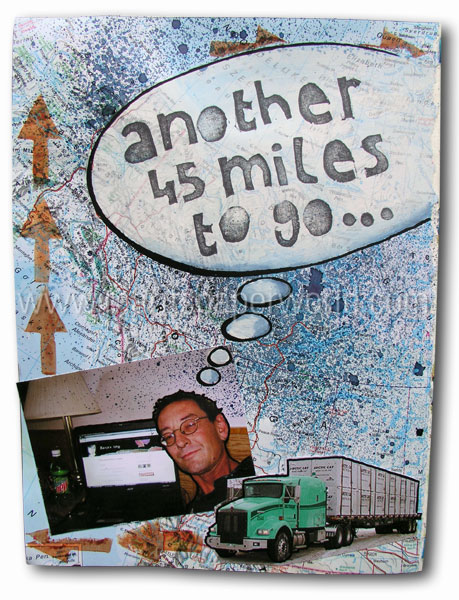 Seven years ago my brother emigrated with his family to Canada, where he worked as a truck driver. In 2009, I had my first ‘top 2000 party’ on my blog and my brother, on the road in the icy cold of Canada, listened to the Dutch radio by tuning in on my blog on his laptop. That day, he stranded with a broken engine and had to spend the Christmas days in a motel. His laptop, the top 2000 and email-contact with me helped him through the days. When his truck was repaired, and after he made it home to his wife and children, he created his first-ever ‘ layout ‘ and submitted it just in time for the last day of the top 2000 party, 2009. “Another 45 miles to go … (..) I gotta get home to my child, my wife.” Since then, he submits at least one work each year for the top 2000 party. 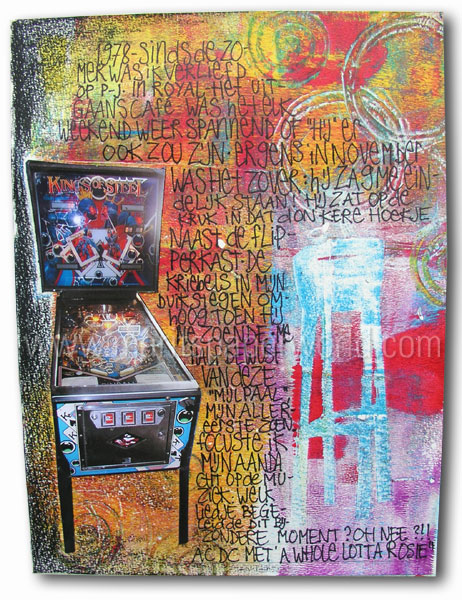 1978 – since the Summer I was in love with P. In café Royal, where my friends and I gathered, I was nervous every weekend to see if “he’ would be there also. Somewhere in November it finally happened: P. noticed me! He sat on a bar stool in a dark nook next to the Pinball machine. The jitters in my stomach rose to my head when he kissed me, but somehow I was half aware of the fact that this had to be a milestone: my very first ‘French kiss!’  One way or another I managed to focus my attention to listen to the music that was playing. I wanted to know what song would attend this special moment in time.  Oh no!!! Wahaaa … AC/DCs “Whole Lotta Rosie.” 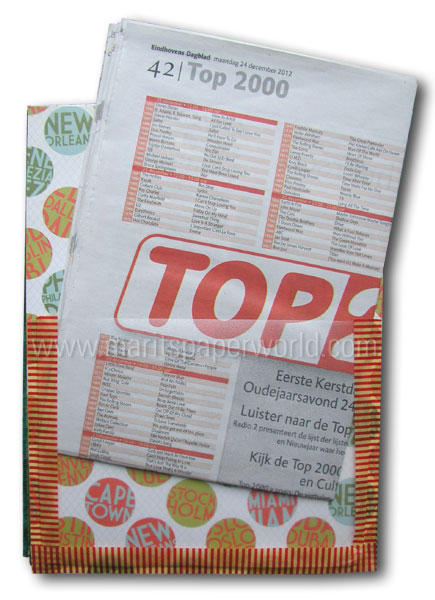 Pfew, that was a long post wasn’t it?
Hope you liked reading my ‘background stories’.

Have a wonderful weekend, make some new (fun!) memories!

Added P.S.
FEATURING came from the printers office today.
We used our eagle-eyes while flipping through the magazine…
but there’s nothing wrong with it. It looks just PERFECT!

The first shipment will be on Monday January 7… so if you
have not done that yet, BUY your copy in the store right now!