It’s Wednesday, the day that I show you what’s on my work desk and join the WOYWW community. In the next days I will hop over to the blogs of the other participants to peek at their desks… it’s a really fun event! Our weekly hostess is Julia from the UK, and you are most welcome to join. Read all about it here. 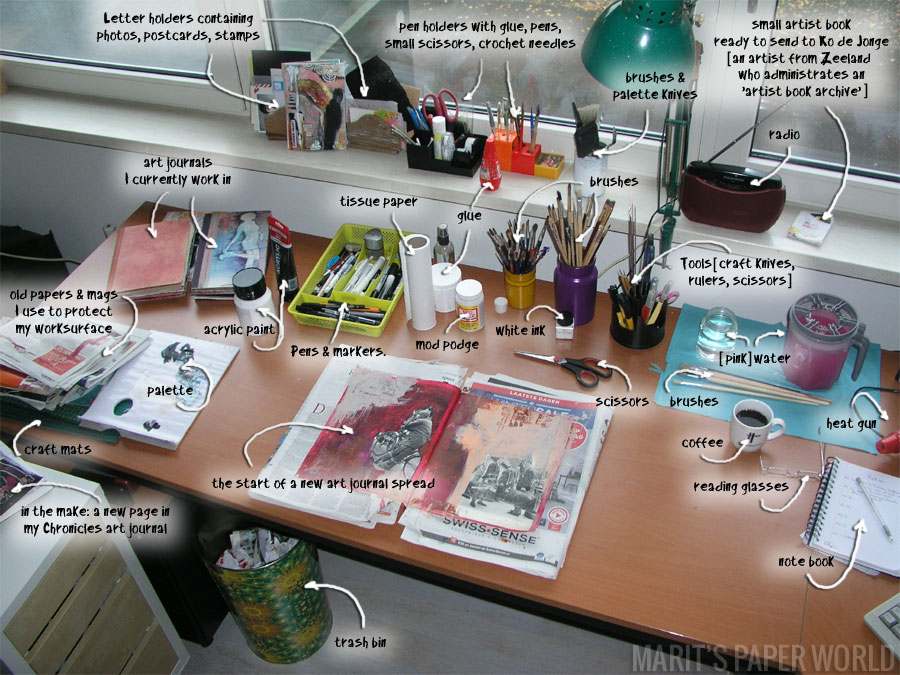 You may be curious to see the small artist book that is in the window-sill, but I haven’t taken photos of the pages yet. However, I do have bigger art journal pages for you because I created two more pages for The Documented Life Project. 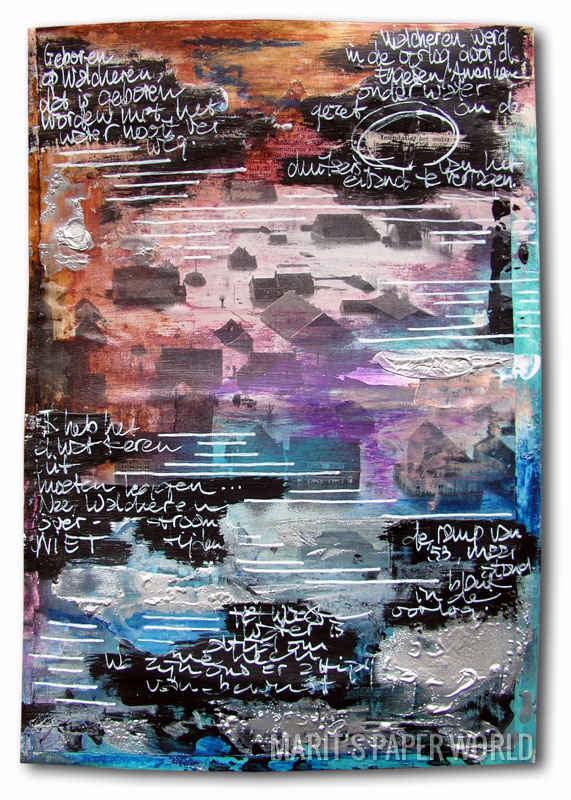 I was born and raised on the peninsula “Walcheren” in Zeeland (which is a province in The Netherlands) and I moved back here last year. Most Dutch people who think of Zeeland mention the 1953 North Sea flood (Dutch: Watersnoodramp, literally “flood disaster.”) It was a major flood caused by a heavy storm. In the night of 31 January – 1 February 1953, many dikes in the provinces of Zeeland, South Holland and North Brabant proved unable to resist the combination of spring tide and a northwesterly storm. On both the islands and the mainland, large areas of country were flooded. Many people still commemorate the dead on 1 February.

Most Dutch people presume that Walcheren was flooded too, but that wasn’t the case in 1953… Walcheren ‘drowned’ in 1944 already, during World War II. Here’s a little ‘history lesson’ for you.

Atlantikwall and the inundation of Walcheren

The former island Walcheren was an important part of the German Atlantikwall. The coastline from Vlissingen to Westkapelle dominated the entrance of the river Schelde which is entrance to the port of Antwerp in Belgium. The island itself can be thought of as a saucer with a rim of dunes and dikes. During WW 2 there were two lines off German bunkers build, one which was right on top of the dunes and dikes at the seaside and a second line about 1 to 2 kilometers inland. […] An allied invasion from the sea was not possible and an approach over land was long and very well protected by the second line of bunkers (the land front).

Although the town of Antwerp and its harbor were liberated it could not be used by the allied forces because the entrance was blocked by the German defense line at Walcheren. The solution the allied forces chose was bombing the dunes and dikes at four locations at the beginning of October 1944. This opened the ‘rim’ of the saucer and the island was inundated, thus rendering the second German defense lines useless.

The changes in the landscape are very well visible today. On all four locations inland lakes were created by the power of the incoming water. The whole island suffered from this inundation.

By 1953, the dikes of Walcheren were restored. Since they were heavy and new, they protected the isle of Walcheren from the flood. While the rest of Zeeland suffered from the storm and flood, the habitants of Walcheren kept it dry.

The page I created for The Documented Life Project shows flooded houses from that time and the story I mention above.

*Your challenge is to create a focal point on your piece this week. Add layering as you choose. 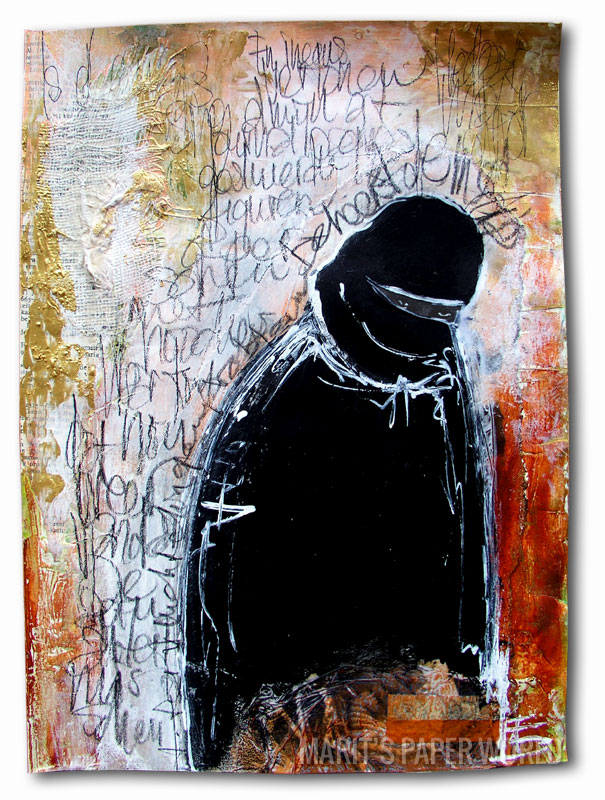 A lot of hooded and veiled figures appear in my art journal lately. I puzzled over the ‘why’ but then it became clear: it started with my new art journal! The book that I am working in (see former post) contains photos taken in Morocco and a lot of veiled women are on the photos. These characters appear on all my art journal pages now…

Oops, this is a rather long post and I know ‘Wednesday desk hoppers’ don’t like that – sorry guys! I’ll stop typing right now.