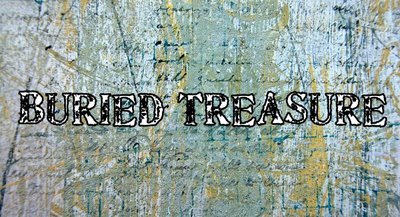 Three years ago, Seth -from The Altered Page – started an annual treasure
hunt. Buried Treasure is about digging deep to uncover some hidden gems.
The premise is simple. Today, Wednesday July 11th, all participating bloggers
re-post one (or more) of their favorite posts that ever appeared on their blog.
You can find the list of participants on Seth’s blog. I’m one of them so here’s
my ‘buried treasure’; a post from August 2nd, 2010 that is very personal and
very dear to me.

Why I am who I am

This is going to be a somewhat different post.
It depends on you if you will notice the importance of it.

You can look at it as just a post – a long post – and if you don’t feel like reading
you just look at the layout I made for These are a Few of my Favorite Things.
(The challenge was to scrap your favorite band) If you do that, you probably
“scan” the large amount of text that follows to see if your eye catches another
important word (which I don’t think will be the case) – then go to the comment
section and type some nice words about what I made.
You can do that. I have no problem with that.

But this layout that I’m about to show you tells a whole story about me.
There’s a lot of emotion in there and there’s a lot of growing up that you won’t
be able to see if you don’t read the words that I wrote to go with it.
So if you want to know me just a little bit better, deeper…
I recommend you take your time to read this post.
Even listen to the music.
Watch the bands.
Bands you know,
bands you don’t know.

I’m going to explain where it all came from.
I will lift a corner of the veil.
MY veil.
This is how I grew up.
This is part of why I became who I am today.

Here’s the layout I made. 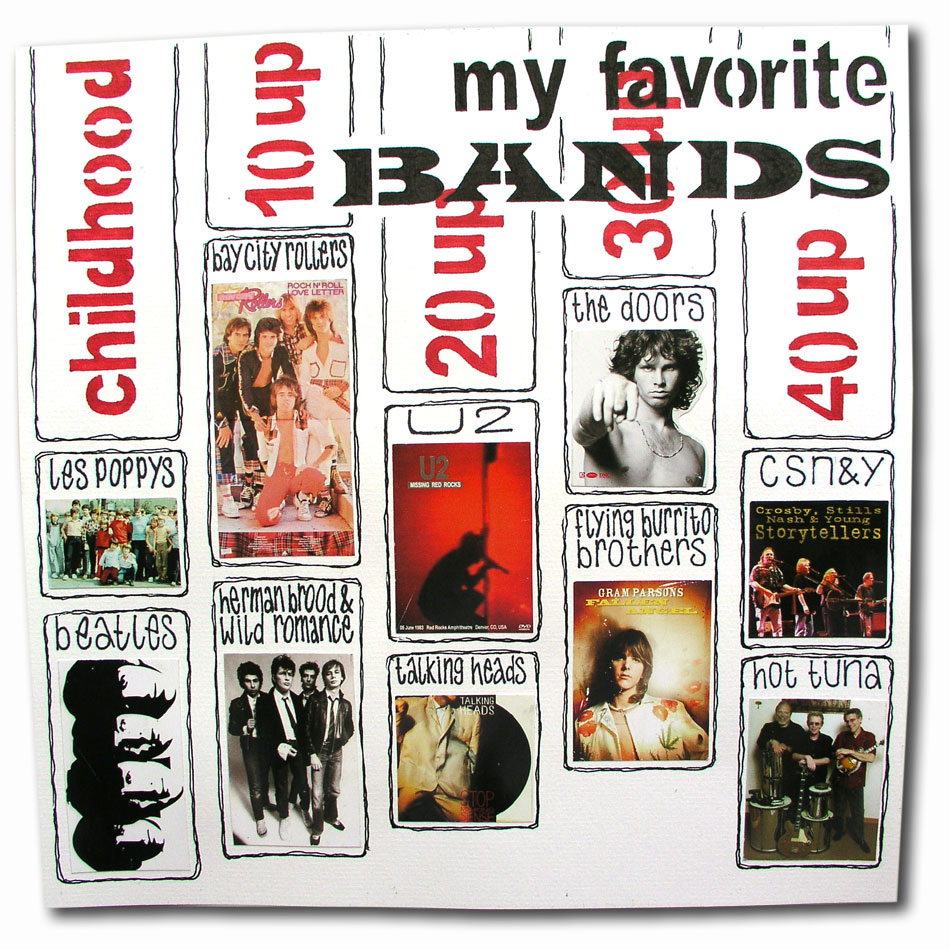 1970
A warm Summer day. A young woman sunbathing in her backyard.
She has long, black hair. Her eyes are outlined with black eyeliner and she
wears a crocheted bikini. From where she lays, she can see her husband
standing at the entrance of the antique shop they own.
He wears jeans, a bright coloured shirt and he has a beard. He smiles.
She hums along with the music that’s coming from the house.
Then, a little girl comes dancing from the house.
“Mom?”
“Yes dear”
“That music mom, who is that?”
“That’s a band called the Beatles honey”
“They sing in another language, don’t they?”
“Yes, that’s English”
“Do you know what it means, what they sing?”
“Yes sweetie, they sing “daar komt de zon” (here comes the sun)”
“I thought something like that already mommy. It sounds that way.
I really like this song!”
“That’s nice love, I do too”

The little girl’s grown up now, but she clearly remembers the first time she
realized that music, even though sung in a language that she didn’t understand,
conveys a certain emotion and tells a tale…
I am that little girl.

On my layout: Beatles – Here comes the sun

1971
One year later and I am aware of music. I’m aware of radio.
Some music I like, some I don’t.
I understand the words when it’s in Dutch, but most songs are sung
in a language I don’t understand. English.
And then, one day, I hear a song on the radio in another language.
Not Dutch, but not English either. I can hear thát much.
But what’s most special: this is a popsong sung by kids!

In the evening, I watch “Toppop” – a Dutch music show.
And there they are. Kids. Boys. French boys.
There is a whole group of them!
They are my age, they dress like I do – following the latest
fashion – and they have a hit record!
My mom not only speaks English, but also a little French, and
she helps me out with the words again.
“No, no, nothing changes. Everything, everything continues”

On my layout: Les Poppys – Non, non, rien a changes

1976
A new group hits the charts in Holland. A Scottish band.
Five young “lads” – barely older then I am. They wear clothes with
tartan piping along the pants. I’m just at the right age (and so is my friend
– Hi Lena!) to fall head over heals with these boys. From that moment on,
we become BIG FANS. I wear tartan. I buy all their records. My teenage
room is filled with posters. I keep scrapbooks. 7. (Yes, SEVEN!)

On my layout: The Bay City Rollers – Bye Bye Baby

1978
Halfway my teens. I go out on Saturday nights, I have dates and I take the
posters of the Bay City Rollers off the wall. They are sooooo “childish” and
“over” and “un cool.” I want to be cool! I want the boys to look at me as
a rock chick. I wear tight jeans and a leather jacket. I have long hair and
a comb in my back pocket. The music to go with that? Ha, you Dutchies know!
Herman!!! Herman the drug addict. Herman, the coolest junkie on earth!
ZZZZSSSSSSSSSSSSSSAHH! (Pay close attention on the beginning of the
video to understand this one 😀 )

On my layout: Herman Brood & his Wild Romance – Saturdaynight

1983
I finish my marriage as well as my high school.
The Summer of ’83 – before I move to another town to study to become a
teacher in arts – I live in a house which I share with 3 other girls. One of
them becomes my best friend. We talk all night, we go out and dance all
night, we drink all night, we go to the cinema to watch French (Bunuel)
movies and we party! I’ll never forget the Summer of 1983.

1985
I’m in my twenties and I become more and more myself (I am no party girl!)
I meet a guy (he will become the father of my son) and we go live together.
We are students and we don’t have much money but one weekend we go
to Brussels. I don’t remember how we could afford that, but we went to a big
cinema to see the movie “Stop Making Sense”. I liked the music, those strange
words (I understand English by now!) but what most fascinates me are the
costumes! Looking back, it’s sooo “eighties” but when I saw back this movie
on DVD the other day, I still was in ooh and aah.
That big suit – oh my – that big suit!

1995
I have a degree as an art teacher. I have a degree as a social pedagogue.
I’m in my thirties and I can’t find a job. I’m “too old”, they say.
So I stay at home with my toddler son. One day, in Summer, when I sit
outside in the small back yard, a storm rises up. I go inside to turn on the
music and I open the windows to the garden. Then I go back outside and
sit under the overhang. There’s thunder, there’s lightning. The rain comes
down as if it was monsoon and it’s hard to tell if I hear the music or the
weather. I listen to Jim Morisson’s voice mixed with the rain and I decide
to not let myself fade away…

On my layout: The Doors – Riders on the Storm

1998
I left the father of my son and I live in a apartment. My son lives with me
half the week and every other weekend. I’m a so called “co parent”.
I have a job and I meet a man. A man who understands me. A man who brings
out the best in me. A man who knows a lot about music. Every time when I
say I like some sort of music, or describe what I like, he buys me the right CD.
Mostly bands I’ve never heard of – but he never fails to surprise me with just
the right music. The music I described but not knew existed for real.

2003
I hit the forty… eeeckkkk. But it’s no big deal after all. I feel better than ever.
I live together with the man I love. My son is going strong. Our house is a
very very very fine house! I discover scrapbooking. I love life.
Sometimes I think back on some periods, and then I’m glad I decided to
not fade away. Glad for not giving in. For staying strong and go for it.
So000 glad – here’s a metaphor…

2007
My beloved comes home with a DVD of a concert. As usual, I don’t
know the band. And, as usual, he gives me a little music history lesson.
Jorma Kaukonen, famous guitarist and Jack Casady, legendary bassist –
both from the band Jefferson Airplane. Oh. OK. Right. Let’s watch the DVD.
Normally, when M. brings home another concert DVD, I watch for 10 minutes.
Something like that. Not this time! WOWZAH! My beloved still manages to
surprise me with “new” (which is actually old) music.

On my layout: Hot Tuna (live at Sweetwater) – I See the Light

Are you still here?
Did you read it all?
Did you listen to the music?
Welcome to my world!