Good day y’all… I present to you an unexpected ‘extra’ blogpost this week, ’cause there’s this little journal I want to show you and it’s content needs some explanation so I thought I’d write about it in this seperate post.

Last year, my overseas-internet-art-friend Robert Stockton send me a print of one of his fabulous artworks. Last March, I finally found a fitting frame for it and now the piece is waiting for a ‘rail on the ceiling’, so we can expose it in the hallway.

While framing the art I thought it would be nice to create something for Robert in return and I created a tiny art journal. The pages are filled with dates and (parts cut out of) news photos. The dates all refer to events that happened in the Netherlands and had an impact on the Dutch people and/or me. Sometimes a small inpact, sometimes big, but these dates are all in some way important to (some of) the Dutch. I send this little journal to Robert explaining the above, but didn’t tell him what the ‘events’ were… and I smiled thinking of him trying to google all the dates and get an insight on what happened…

It’s been long enough now that I had him curious, so today I will explain it all.

Cover: tiny journal Impact (photo of footsteps in the sand/mud) 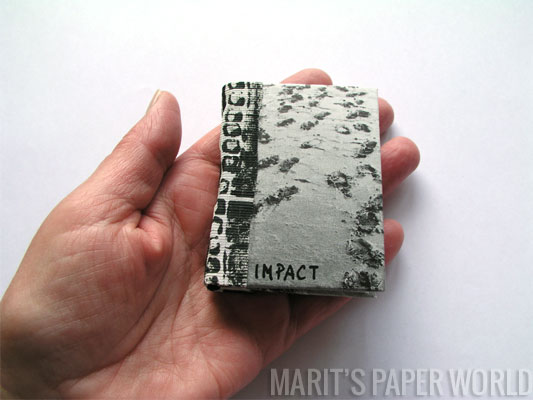 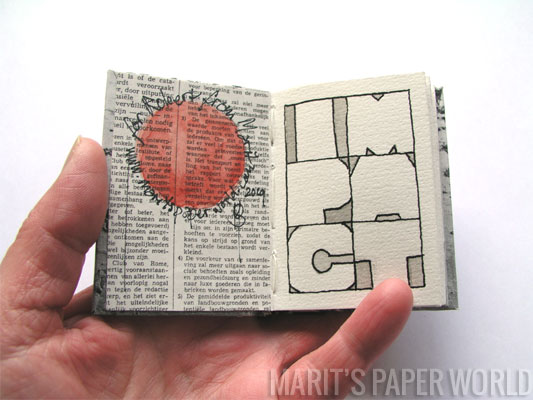 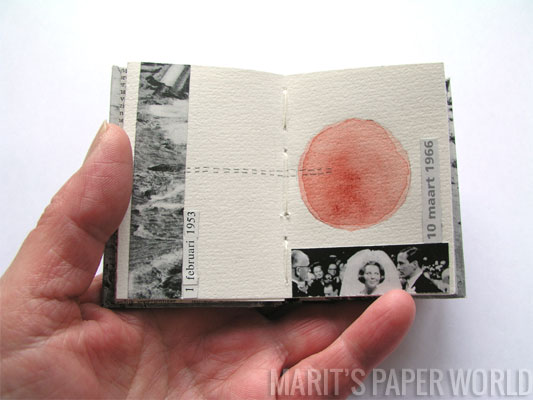 Impact on me/The Dutch: In 1953, I wasn’t born yet (I’m from 1963) and the island – Walcheren – that my parents lived on did not flood in 1953, due to the fact that Walcheren was inundated in World War II and dunes and dykes were renewed and strengthened after the war. Still, the flood of ’53 and ‘fight agains the water’ has always been an issue in Zeeland, and every habitant of the islands is aware of the strenght of nature/water. Being born and raised in Zeeland, these ‘lessons’ were part of my education.

Impact on me/The Dutch: I don’t remember this event either… but it shows that I grew up and live in a Monarchy – there’s a little “pro’s and con’s” discussion sometimes, but most Dutch people love their Royals. 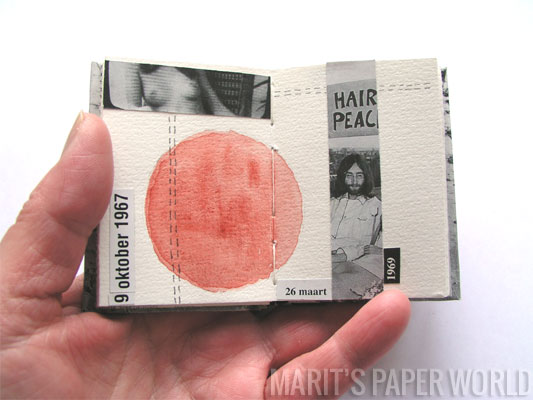 1967: What happened: Phil Bloom is a Dutch artist, entertainer and actress. She was the first person to appear completely nude on Dutch television, on October 9, 1967. She was a member of the Fluxus network.

Impact on me/The Dutch: I grew up in a time of freedom and happiness… the ‘times they were a-changin’ and The Netherlands was a tolerant and open country and pretty progressive at that time.

1969: What happened: As the Vietnam War raged in 1969, John Lennon and his wife Yoko Ono held two week-long Bed-Ins for Peace, one at the Hilton Hotel in Amsterdam and one at Fairmont The Queen Elizabeth in Montreal, each of which were intended to be non-violent protests against wars, and experimental tests of new ways to promote peace.

Impact on me/The Dutch: This is again a date/event that pictures the time and atmosphere I grew up in. I turn out to be a pacifist. 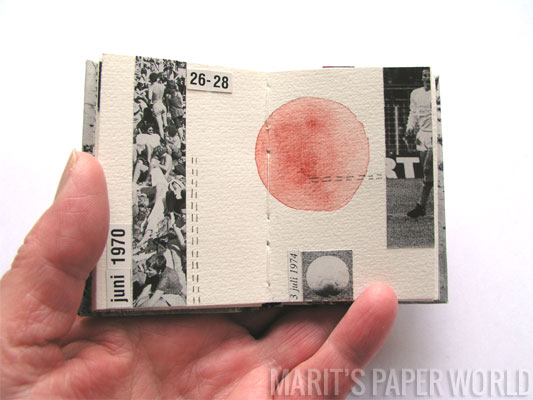 Impact on me/The Dutch: My parents already listened to Bob Dylan and a Dutch protest singers in the sixties/seventies. I prefer music from that era.

Impact on me/The Dutch: I was a ‘tomboy’ and played mostly with boys. I was a huge soccer (in Dutch ‘voetbal’) fan and the goalkeeper of our village-group-of-boys-playing-soccer. I became a femist at approximately 10 years of age, when I was told (by the boys, of course) that my dream of being a prof soccer player could never be realized ‘because you are a girl” …. ?!!! I remember the 1974 WC-final match well… I think all the Dutch do ’cause the fact that ‘we’ lost from the Germans became a national soccer trauma that is referred to right up to this day. 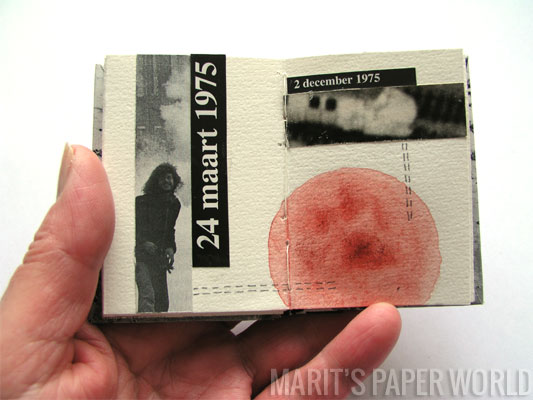 1975: What happened: The Nieuwmarkt riots, also referred to as the Amsterdam metro riots, is a series of serious disturbances in the Nieuwmarkt neighbourhood of Amsterdam, Netherlands. On 24 March 1975 and on 8 April 1975, protests against the planned demolition of homes ended in confrontations with over a hundred municipal police supported by 500 military police. The homes were considered by residents and protesters to be in good condition, but had to make way for the construction of the East Line tunnel of the Amsterdam metro.

Impact on me/The Dutch: These were my (early) adolescent years… those were turbulent times (see next pages also) with lots of protest and politics, that I became aware of at that age.

1975: What happened: On 2 December 1975, seven South Moluccan terrorists seized a train with about 50 passengers on board in open countryside near the village of Wijster in the northern part of the Netherlands. The hijacking lasted for 12 days and three hostages were killed. The South-Moluccans came to the Netherlands for a temporary stay, promised by the Dutch government that they would get their own independent state, Republik Maluku Selatan (RMS). For about 25 years they lived in temporary camps, often in poor conditions. After these years the younger generation felt betrayed by the Dutch government for not giving them their independent state and they started radical actions to draw attention to their case.

Impact on me/The Dutch: I remember the shock this news brought, the tv scenes from the train standing in a field, the discussions on television… In the years that followed I went out on Saturday nights and met some Moluccans that lived in a town nearby and went to the same bars as I did… nice guys, that told me their history/story (see explanation above.) I realized I had not learned these things in school… history lessons were all about ‘the good things the Dutch People had achieved in the past’. The bad wasn’t (still isn’t??) in the school books… 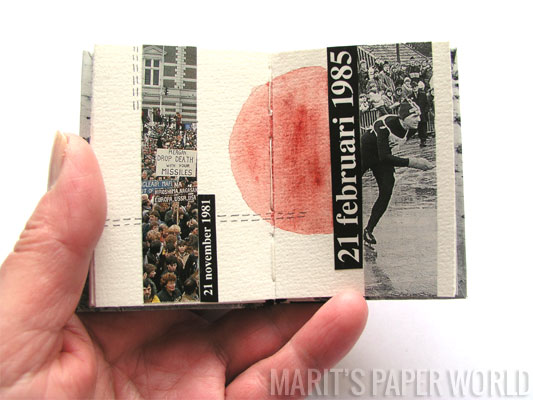 1981: What happened: AMSTERDAM, Netherlands — Half a million people crushed into Amsterdam to protest nuclear weapons and the Reagan Administration’s arms policies in the largest demonstration in Holland since its liberation from the Nazis in 1945.

Impact on me/The Dutch: I was there!

1985: What happened: The Elfstedentocht (Eleven cities tour) is a long-distance tour skating event, almost 200 kilometres (120 mi) long, which is held both as a speed skating competition (with 300 contestants) and a leisure tour (with 16,000 skaters). It is held in the province of Friesland in the north of the Netherlands, leading past all eleven historical cities of the province. The tour is held only when the natural ice along the entire course is at least 15 centimetres (6 in) thick; sometimes on consecutive years, other times with gaps that may exceed 20 years. When the ice is suitable, the tour is announced and starts within 48 hours.

Impact on me/The Dutch: There was a ‘tour’ in 1963, then this one in 1985 (I remember I was in art school and they had a television brought into the school cafeteria so everyone could watch) in 1986 and in 1997… that was the last one and every winter, when temperatures drop below zero, the ‘ice fever’ starts and when it freezes for a few weeks you cannot turn on the telly without hearing someone, anyone, speculating about ‘having a eleven cities tour’… it is ‘a thing’ in the Netherlands. 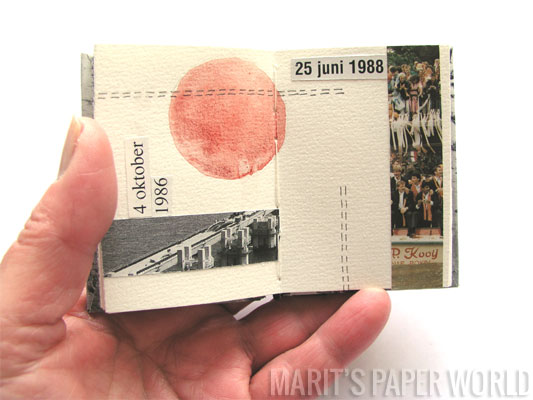 1986: What happened: The Oosterscheldekering (English: Eastern Scheldt storm surge barrier), between the islands Schouwen-Duiveland and Noord-Beveland, is the largest of the 13 ambitious Delta Works series of dams and storm surge barriers, designed to protect the Netherlands from flooding from the North Sea. The construction of the Delta Works was in response to the widespread damage and loss of life due to the North Sea Flood of 1953.

Impact on me/The Dutch: Zeeland, the province I was born and raised – and now again live – is famous for these ‘Delta Works’ (see expanation at the first ‘1953’ page.)

1988: What happened: The UEFA Euro 1988 Final was a football match played on 25 June 1988 to determine the winner of UEFA Euro 1988. The match was contested by the Soviet Union and the Netherlands at the Olympiastadion in Munich. The Dutch won the match 2–0, with goals coming from captain Ruud Gullit, a header in the first half and tournament top scorer Marco van Basten. At 2-0, Hans van Breukelen saved a penalty from Igor Belanov, a penalty that he had given away for bringing down Sergey Gotsmanov.

Van Basten’s goal, in which he volleyed right-footed over Rinat Dasayev from the tightest of angles on the right of the penalty area from Arnold Muhren’s looping ball from the left, would later be described as one of the greatest goals in the history of the European Championships. Holland celebrated (in the video, the ‘celebrating part’ starts at 22.02 – and it’s a pretty special way of celebrating on the canals in Amsterdam.)

Impact on me/The Dutch: I watched this match surrounded by friends and hell, did we celebrate! We didn’t went to Amsterdam (see above video) but every village, every small town, every city… heck, all corners of the Netherlands were coloured in orange! 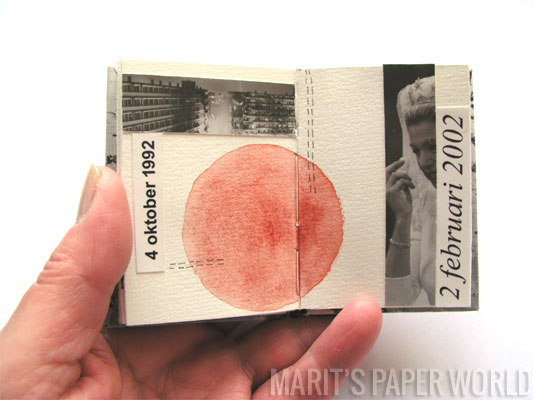 1992:  What happened: An Israeli cargo jet crashes into an apartment complex, minutes after its pilot reported engine trouble on take-off. Dozens of people are killed by fire and burning debris. At least 250 people may have died. The El Al Boeing 747 struck the apartment complex, and flaming wreckage scattered over a wide area of a densely populated area near Schiphol airport.

Impact on me/The Dutch: My son was only three months old… I watched the news on television holding him in my arms, shocked and hoping he would have the chance to live his life without (too much) drama.

2002:  What happened: Dutch Crown Prince Willem-Alexander marries his Argentine bride Maxima Zorreguieta, watched by a congregation of kings, queens and dignitaries from around the world and all the Dutch people in front of the television.

Impact on me/The Dutch: I don’t have ‘a thing’ with the royal family but yup, I too watched the wedding on television. ‘Maxima’s tear‘ (at 3:00) is etched in the collective memory of Holland. (I think all people seeing it cried along with her…) 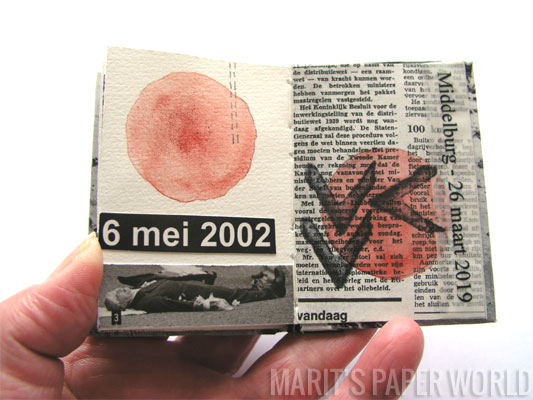 2002: What happened: Pim Fortuyn, a Dutch politician, was assassinated in Hilversum, North Holland on 6 May 2002, nine days before the Dutch general elections. Fortuyn was 54 years old when he was assassinated by Volkert van der Graaf in a car park outside a radio studio where Fortuyn had just given an interview. The attacker was pursued by Fortuyn’s driver and was arrested shortly afterwards while still in possession of the handgun used to assassinate Fortuyn.

Impact on me/The Dutch: Again, the times they are a changin’… this political assassination shocked all of the Dutch people, no matter if they’d be supporters or opponents of Fortuyn’s political ideas and party. This country has changed since then. I could say all kind of things about that but this blog is mainly for showing you my art work and I rather keep (political or otherwise) discussions away from it.

Hope you enjoyed this ‘extra post’. I may skip my Wednesday post (we have an old friend staying with us that day) but I see you again by the end of the week.
Je t’embrasse!